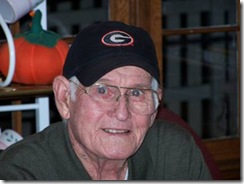 maybe your Dad or your Mom or Cousin or Uncle?  I have often been told that I am a lot like my Dad.  And I can see a lot of him in me—especially in the way I interact with others.  I just learned from Leonard Sweet’s book, The Gospel According to Starbucks that linguists have traced that expression to the Southern Dialect where the words “Spirit” and “Image” were contracted into “Spittin’ Image.” “To say that you are the spittin image of your father is to say that you bear both his spirit and his image. You bring together the visible and invisible, the tangible and the intangible, of your parent.”

That is really what God wants of us, as well. In Galatians 3:26-27 we are told, “For in Christ Jesus you are all children of God through faith. As many of you as were baptized into Christ have clothed yourselves with Christ.” Basically, what Paul is telling us in this passage is that when we commit ourselves to follow the teachings of Christ, we become a child of God. And as a child of God, we are expected to be God’s “spittin’ image.”

We take on God’s spirit—God’s character, the essence of who God is. And we take on God’s image—we visibly demonstrate that we are God’s children through the Christ-like things we do. The chief of which is to love.

How’s your image? Does it need polishing up? How do you reflect the image of God in you?

One Reply to “The Spittin’ Image of God”

This site uses Akismet to reduce spam. Learn how your comment data is processed.